I decided to use these strange times during the lockdown of the UK to update my site from an outdated single static file into something a little more advanced. You can see the previous site in the image below. In this post I'll give a quick summary of this process and the decisions I made along the way. 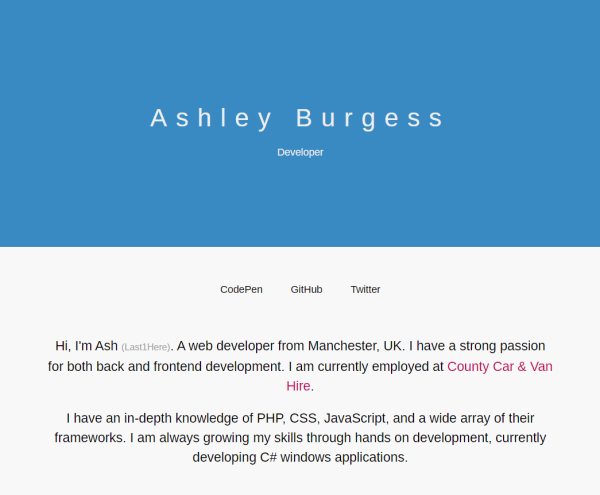 Before starting this project I outlined what I wanted to achieve with this update. I managed to break this down into a few main goals. The first was to introduce a blog to the site, ideally I wanted to write in Markdown with basic asset hosting. Secondly, I wanted to keep it as simple as possible to maintain/update and deploy, the previous deployment process was lacking in every way, think FTP with drag and drop. I wanted not only to have blog posts on the site but to be able to post external links to articles I enjoyed whilst being able to add simple notes of one or two sentences for quick thoughts.

For styling I was happy with the simple layout of the previous version of the site. Finally, it had to be fast, for what I wanted from the site there was no need to have an overly bloated website with megabytes of CSS/JavaScript etc simple small html pages should be enough.

Based on the requirements and previous experience I decided the site would use some form of static site generator. Things such as plugins, changable themes and more advanced CMS features just seemed out of scope for my personal site and more hassle than it would be worth. Keeping my ear fairly close to the ground within this area there were multiple options I knew of:

Based on a quick assessment of these three options I decided to go with 11ty. There were a few reasons for this: I'm not too familiar with GO so that took hugo out of the race. The component based nature of Gatsby would make the site highly customisable and great at interacting with external datasources, but for a very basic site just seemed like overkill.

With 11ty, I would be able to get the site set up in a handful of template files and some basic configuration. It also met all the requirements I set out and has a lot of points of extensibilty should I wish to take advantage of this in the future. During this research I also decided I would be moving my hosting. For this, Netlify seemed like the suitable choice. They offer a great solution for hosting static sites, with easy deployments which I'll go into further detail with later. They also offer a Git integrated CMS that will allow me to manage the posts without needing to use Git, I see myself correcting all my typos with this.

The development process was straight forward and took a couple of hours stretched across a few days. This post probably took longer to write. There are plenty of boilerplate projects to start from, I used the eleventy-base-blog as the base for this site. This boilerplate uses nunjunks as the templating lanuage and markdown as the writing format. Modifying the templates to accept the custom post types of external links and notes I wanted was as simple as a couple of if statements and some HTML. I could then optionally turn a post into a link or note using the yaml config of the post. As mentioned I wanted to keep the site pretty similar in term as style as the old version, so I just reused the previous site styles as a set base styles. There were a handful of new UI elements added for the new blog pages, navigation and image size styles. All of this can be seen in the index.client.css.

A few more plugins were added for syntax highlight, read time estimation and the ability to define image sizes in markdown. Basic SEO was setup by default for which I added some social meta tags to improve this a bit. As highlighted earlier an import goal for the site was to be pretty fast, as all the components of the site are simple html and images it was already fast at this point. But, there was 2 tiny files being requested on every page for the required JS and CSS, inlining and minifying these into the HTML as part of the build process decreased the average load time by a few 100ms. Caching these files would have helped for returning visitors but as the files are so small the added size to the html is negligable. The final configuration to get this all working can be seen in the .eleventy.js file.

Next was setting up Netlify CMS. The initial set up was as simple as adding a /admin folder with an index.html that imported the required js files from a CDN. Making sure 11ty copied this over to the _site folder during build was a single line change. After that configuring the admin panel to support the three post types is done via a config.yml file. A couple of advanced customisations were added such as the custom preview templates for the editor and the local Git repository editing beta feature.

The previous version of the site had a pretty tedious deployment process. It involved me manually uploading the source files to the server via FTP every time an update was needed, probably why I hadn't updated it in years. Netlify greatly improved this with automatic deployments straight from Github. From within the Netlify UI selecting the repo to deploy, the build script and the resulting dist folder to publish, had it set up and auto-deploying in seconds.

Finally pointing my domain to Netlify's load balancer was completed following their documentation. This was probably one of the harder tasks to achieve as I still had files and other sub-sites I was hosting for friends and family (mainly Wordpress), on my previous setup. Moving these into the new site would clutter the repo and in the case of the sub-sites would not really be possible. I was able to come up with a simple solution that involved pointing the primary domain to Netlify and use redirects to point to a secondary domain I will use for the previous host.

In conclusion 11ty is an easy to use and customisable static site generator. The overall setup of the site was pretty quick, you can see the end result on the page you're currently on or visit the home page. Netlify simplifys the deployment process which will remove that excuse for me to not post things, I'm sure I'll find another. The finished site fulfills all the goels I set at the beginning although I have future plans for a handful of nice to haves features. At some point I will get around to adding them. Leaving them here to hold myself accountable;